You are here: Home / Wood Planer / Sawzall vs Reciprocating Saw: What are The Difference? 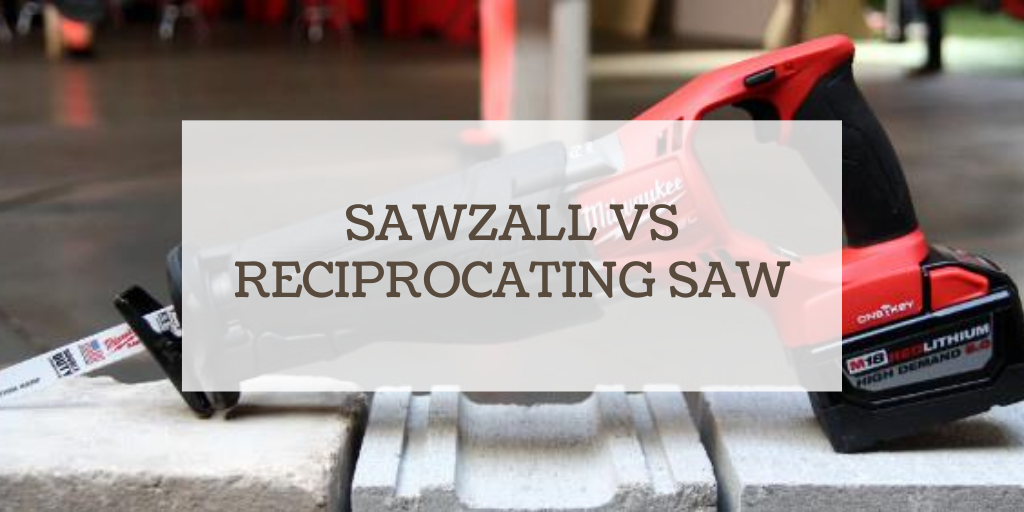 Most of us are guilty of referring to Sawzalls as Reciprocating saws and vice versa. But, unfortunately, they’re not the same thing.

This post aims to break each of them down so that you can have a better understanding of what they are. We’ve also taken the liberty of checking out reciprocating saw reviews and Sawzall reviews and listed two of the best tools in each category.

Not only will you find this post informative, but you’ll also get to walk away with quality equipment that you can rely on for all kinds of projects.

So let’s dive in and get started.

Reciprocating saws are versatile handheld saws that can cut through masonry, fiberglass, wood, and metal, among other things. The saw’s motor activates when you pull a trigger, and it uses several attachments such as blades, brushes, files, scrapers, and rasps. That’s part of the reason why professionals and DIY enthusiasts consider it a must-have tool.

Before we look at the Sawzall, here are two of the best reciprocating saws that the market has to offer. We’ve included both a cordless and corded version, to give you the option of choosing the variation that will best suit your needs. 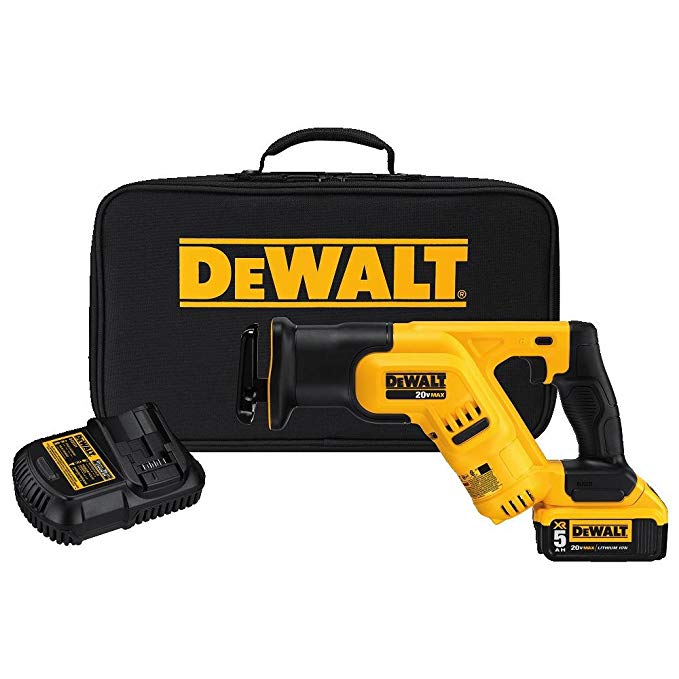 Dewalt offers a cordless reciprocating saw that won’t weigh you down. Its light and compact design make it easy to use and carry with you wherever your project may be. You also won’t have a hard time when you want to work on confined spaces or fit it between studs.

Other benefits you can look forward to include tool-free blade changes, increased positional versatility, and flush cutting. The kit consists of a four-position blade clamp that makes all that possible. This purchase is an excellent fit for people who prioritize precision cuts as well. You’ll get increased blade control thanks to its 0-2,900 spm variable speed trigger. 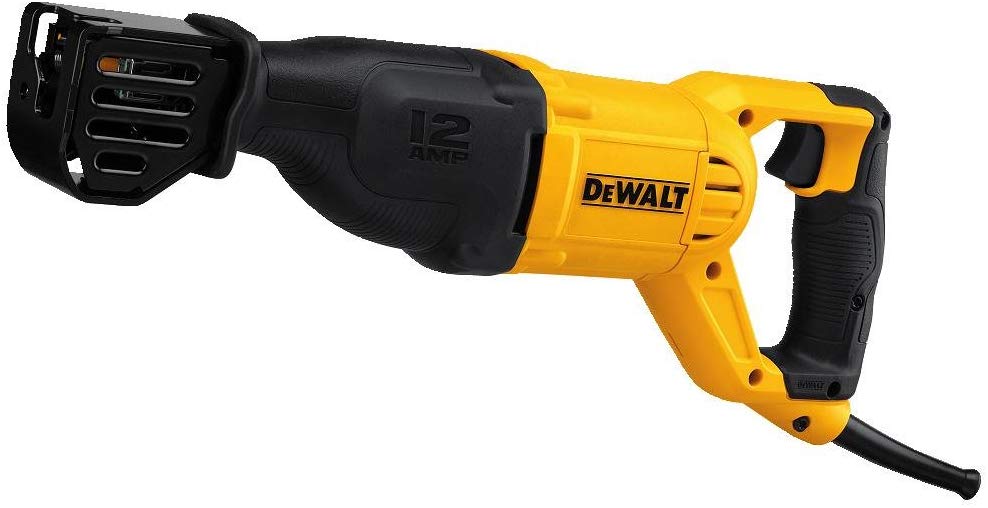 A 1-1/8inch stroke length and a keyless, lever-action blade clamp, are some of the reasons why woodwork enthusiasts around the globe widely acknowledge this saw. The stroke length is responsible for its efficiency, while the clamp fastens and simplifies the blade changes.

The Dewalt saw is versatile, making it perfect for several applications, including heavy-duty projects. You can also use it for flush cutting thanks to its four-direction blade clamp. As for speed, the saw features a powerful 12 Amp motor with a trigger that provides up to 2900spm.

You can trust that it’s going to give you the results you desire regardless of whether you’re dealing with wood, composites, plastics, heavy-gauge metals, plaster, fiberglass, or even rubber.

Makes sense if you are, given that you’ll almost always get Sawzall recommendations when you search for reciprocating saws online. Hence the reason people think that the two names stand for the same thing.

The difference between them is that the Sawzall is a line of reciprocating saws manufactured by the Milwaukee Electric Tool Co. So when people refer to a Sawzall, they’re actually talking about a brand name and not the name of the tool.

But, as we mentioned, the confusion is understandable given that the Sawzall has now become an industry term that people often use when referring to reciprocating saws.

Like the reciprocating saws, we’ve also reviewed two of the best Sawzall saws on the market for your consideration. Have a look at what the cordless and corded variations have to offer. 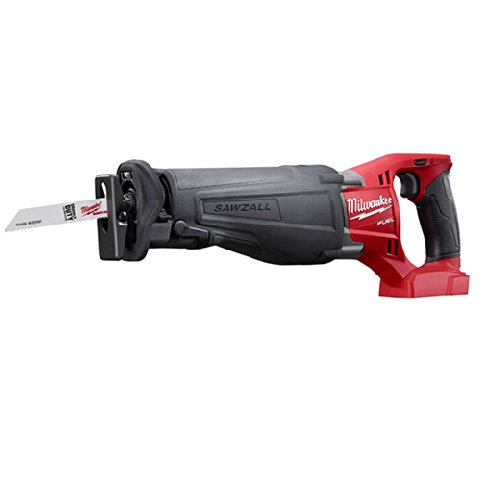 Nothing beats the convenience that a cordless Sawzall offers. Not only will you move around without restrictions, but you’ll also get faster cutting speeds and added durability. This saw also comes with a Redlithium XC 4.0 Battery Pack. Compared to other competing brands, this battery pack offers more work over its useful life and more work per charge as well.

The Milwaukee 2720-20 M18 provides constant power thanks to its power state brushless motor. It supplies reduced heat for an extended useful life and speeds of 3000 spm. That’s why this cordless saw can easily tear through different kinds of materials.

Another feature worth looking at is its Redlink plus intelligence. It is responsible for the saw’s overload protection and optimized performance. The intelligence feature works by using the total systematic communication between the charger, the tool, and the battery. 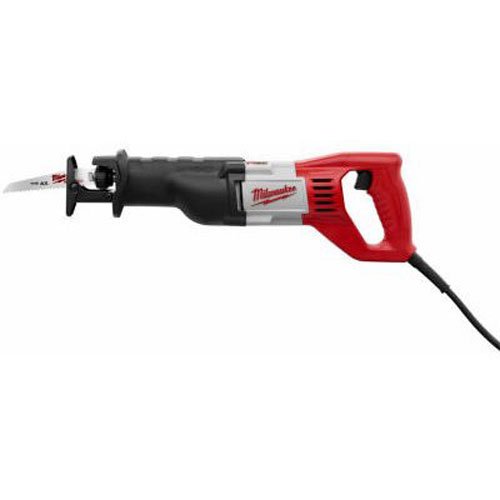 One of the things that make the Milwaukee 6519-31 stand out is the brand’s quick-lock technology. Thanks to the latch on the side, users don’t need tools to add or remove blades, making the process fast and efficient.

It features a high-powered motor with variable speeds of up to 3000 strokes per minute. You’ll rip through wood with ease, depending on the pressure you put on the variable speed trigger.

Other than excellent accuracy and speed, this reciprocating Sawzall is also designed to offer a great user experience. You’ll be able to use it comfortably because its internal counter weight mechanism helps reduce vibration.

Another reason why this Sawzall comes highly recommended is that it has a gear protection clutch. Most reciprocating saws lack this feature. The clutch protects the inner components by absorbing high impact forces. As a result, it extends the gear and motor’s life span.

We’ve come to the end of our Sawzall vs. reciprocating saw review. Now that you know the difference between the two, the kind of tools available under each category, and their pros and cons, we trust that you have enough knowledge to make an informed buying decision.