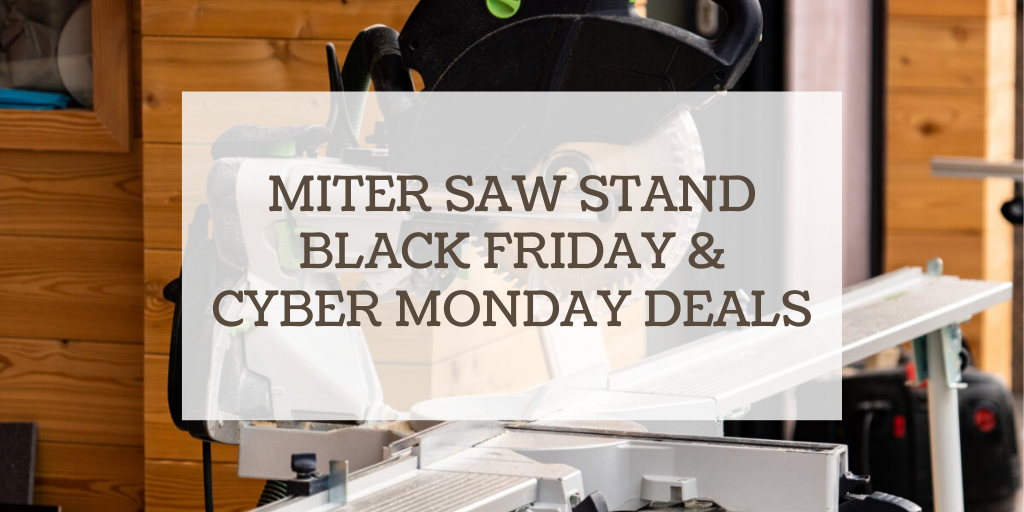 Have you ever experienced arriving at a jobsite, only to realize there’s no place to put your miter saw? This is a not-so-ordinary problem that shouldn’t be taken lightly. After all, balance and stability – or lack thereof – can affect the quality of your finished product immensely.

One way to resolve this issue is by investing in a dependable mounting platform, which should immediately serve as your portable workstation. Just remember that with so many options to choose from, putting in research and employing the right purchasing strategy will go a long way in achieving success.

As for us, our team would like to help simplify this decision. By identifying the top miter saw stands available today, we hope that it leads you to all the best Black Friday deals. 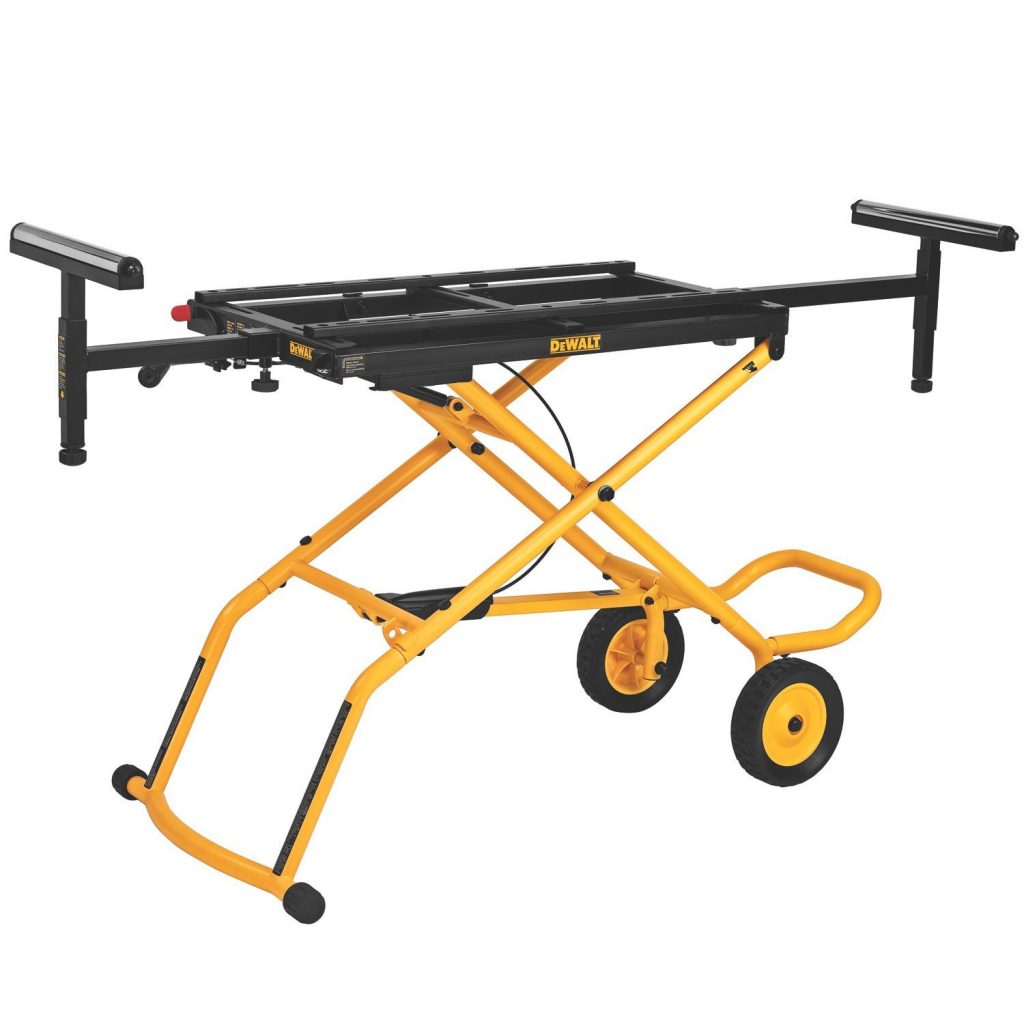 Let’s start off strong, shall we? And what better way to begin than with the DEWALT DWX726 Miter Saw Stand with Wheels. This mid-level option is designed to traverse rough or uneven terrains. It even has two large rubberized wheels that improve jobsite mobility, especially since its maximum weight capacity is currently set at 300-lbs.

The DEWALT DWX726 is likewise fashioned with a reinforced work support system and easily adjustable mounting rails. This makes it compatible with most miter saws on the market today, not to mention different types of workpieces.

You can take this model home at a reasonable price. But do a quick search right now to get the best deals and save a few extra dollars too. 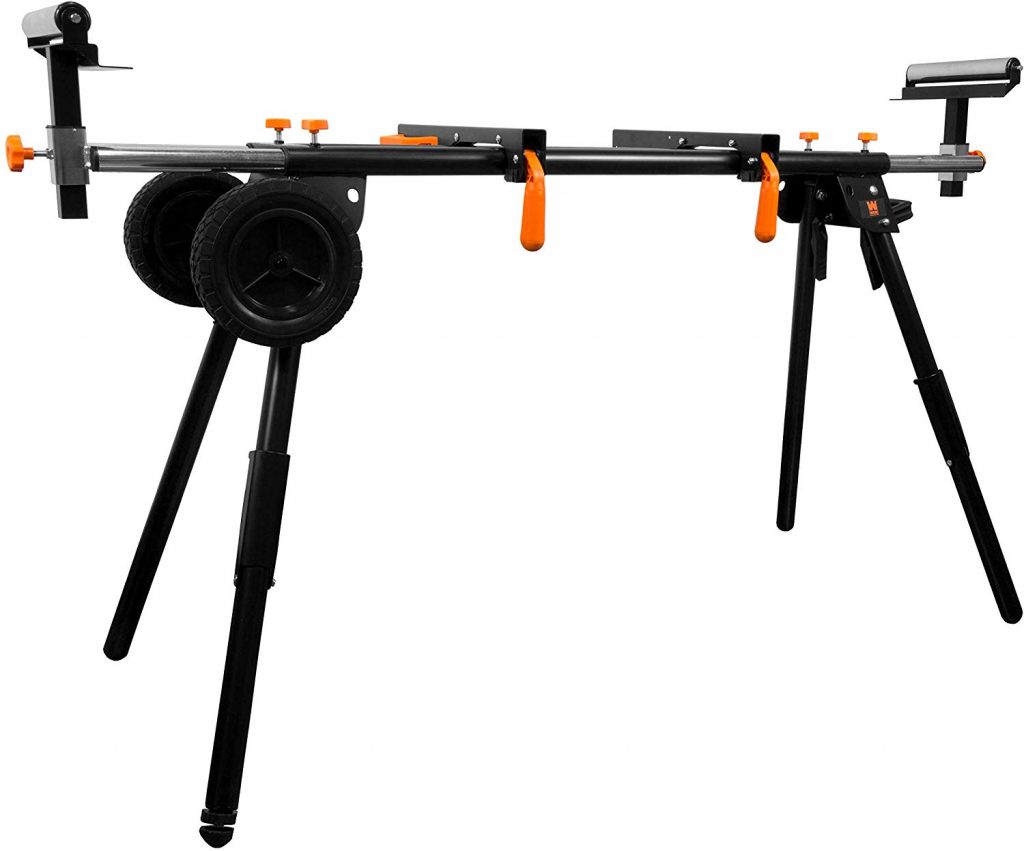 Go from collapsible rolling stand to heavy-duty worktable in mere seconds. The WEN MSA330, armed with two never-flat wheels and a sturdy steel frame, can make any environment suitable for work. Its universal design also ensures compatibility with almost all miter saws, particularly those created by this brand.

What sets it apart from other options, though, is the presence of three 12-V outlets that are already pre-mounted. This inclusion eliminates the need for additional extension cords, which in turn lowers your overhead cost. Without a doubt, the WEN MSA330 Collapsible Roller Miter Saw Stand is a budget-friendly alternative for beginners. And you can probably avail of a better discount by purchasing it this Black Friday & Cyber Monday sale. 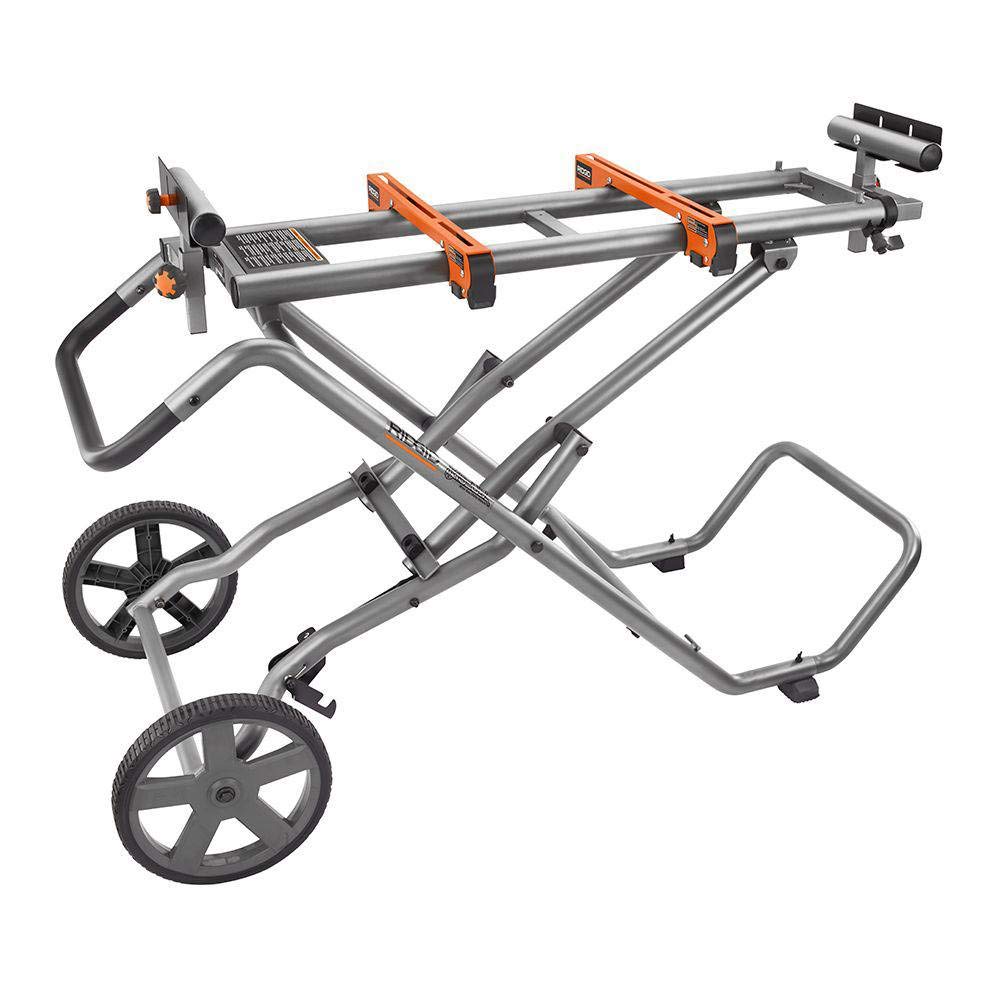 Even just from its looks, you know the Ridgid AC9946 Mobile Miter Saw Stand is built for business. It comes reinforced with an aluminum frame that's not only durable but also appealing to the eyes. Users can alter the height and width, too, helping put workpieces in prime positions. This often-overlooked improvement should go a long way in enhancing the quality of outputs you produce.

The Ridgid AC9946 is also relatively mobile, considering it weighs in at approximately 68-lbs. Its 12-inch wheels, which are 50% larger than others, can easily be dragged up and down the stairs or sturdy enough to circumvent small rocks. Furthermore, the tire's grips have been reinforced for better traction on different surfaces.

Interested buyers must note, however, that this saw stand is relatively pricey, especially when compared to similar models. So purchasing it at a discounted price will only increase its value. And when better to finalize this transaction than on Black Friday and Cyber Monday, right? 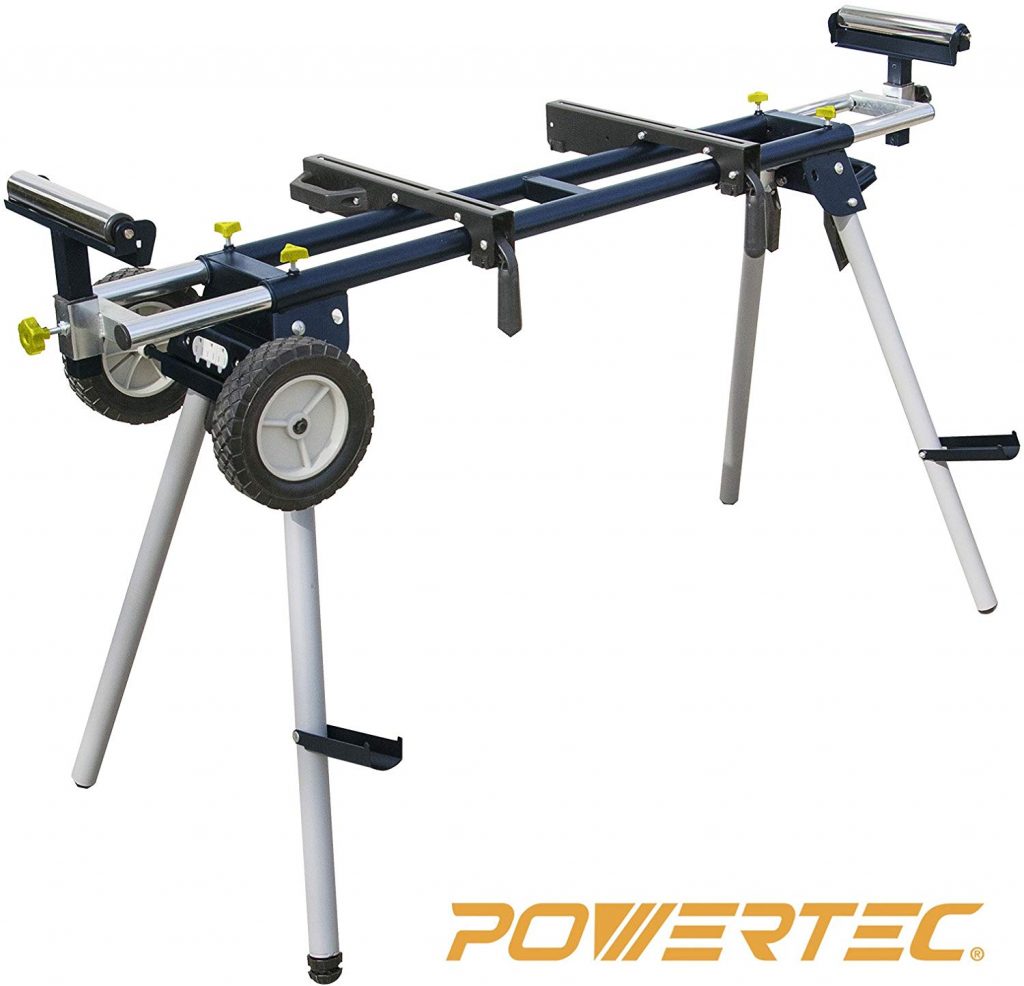 The Powertec MT4000 Deluxe Miter Saw Stand is an ideal alternative for beginners. Some satisfied customers have even described it as a high-end model with an entry-level price, which speaks volumes about its value for money. It certainly is a bargain, especially if you purchase it now.

This accessory, unlike others, is manufactured using round steel tubing for added durability. It can support weight as heavy as 330-lbs and is fully compatible with most 10-inch or 12-inch miter saws on the market. Both its arms and worktable are likewise modifiable to fit your own or a specific task's requirements.

Best of all, the Powertec MT4000 Deluxe Miter Saw Stand is outfitted with spring-loaded locking legs for simple set-up and disassembly. So that once you're done working for the day, just fold the tool, wheel it out, and store. It takes up limited space in your garage. 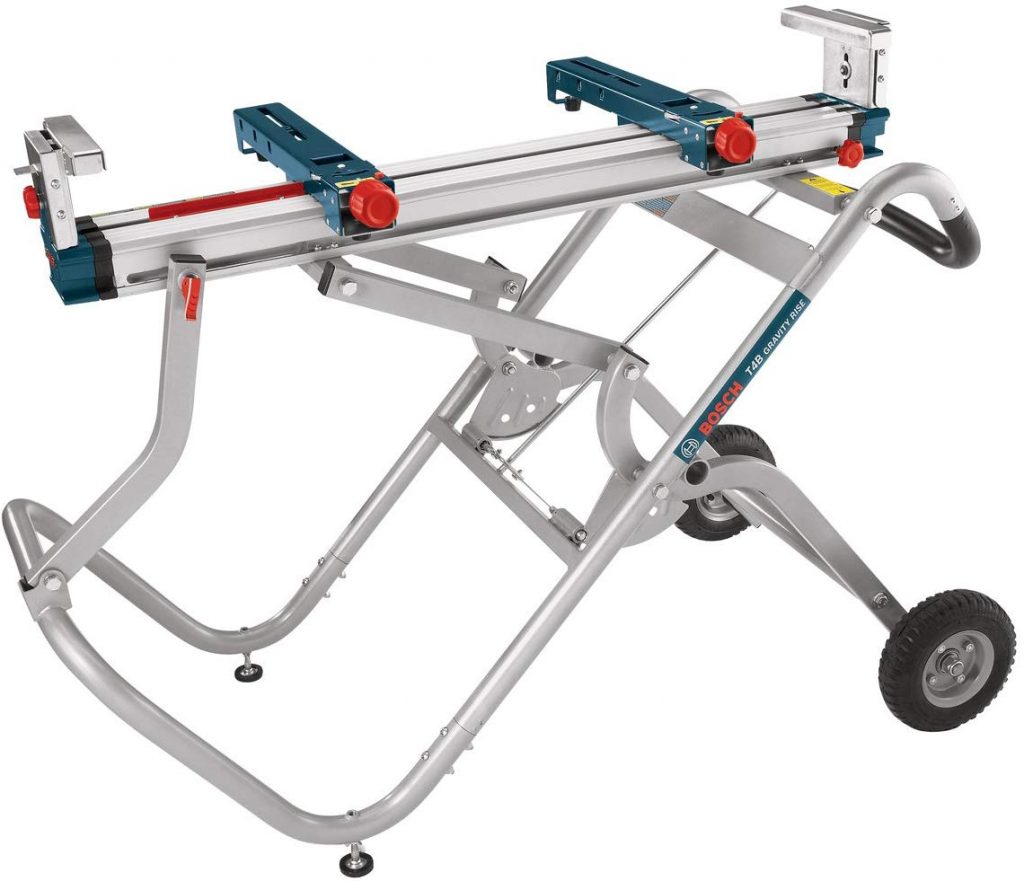 Arguably the most sought-after implement of its kind is the Bosch T4B Portable Wheeled Miter Saw Stand. There are very few other units that come close to its durability, portability, and ease of use, much less cohesiveness of functions. As such, seasoned carpenters or contractors have found this highly beneficial to their daily lives.

The Bosch T4B is relatively bulky, but this is far from a bad thing. Its broad frame, coupled with a telescoping leveling leg and integrated rubber wheels, provides stability even on uneven surfaces. Moreover, it has up to 18-feet of material capacity, the highest among portable saw stands by far.

Finally, we have its gravity-rise system, which is quite possibly our favorite feature. It enables users to fold the machine within a single swoop. Thus, storing and transporting it becomes so much easier.

Unfortunately for captivated consumers, the Bosch T4B Portable Wheeled Miter Saw Stand does not come cheap. At almost $400, it is perhaps the most expensive option in our review article. Don't worry, though, because Black Friday and Cyber Monday have several deals specifically for this product. Just remember to strike now before it's too late.

It still baffles us why so many people underestimate the value that a quality miter saw stand provides. But if you asked us, money may have to do with it. Not everyone is keen on spending an additional $150 to buy something they feel is optional.

Therefore, purchasing one now may be the best trade-off you can get. There is seemingly an endless supply of Black Friday deals or Cyber Monday bargains for this product literally everywhere. Shoppers looking to save more, maximize their budget, and enjoy top discounts may want to strike now – and fast!